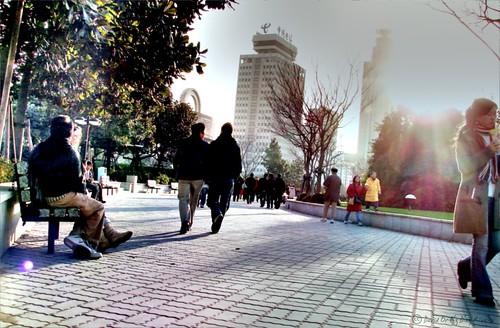 Attractive and well-maintained public pedestrian space is probably essential to a smoothly functioning democratic society, because we are forced to develop and maintain a civic awareness there, our activities are visible and we can meet as equals

This quote comes from Just Enough: Lessons in living green from traditional Japan, the book I’ve been drawn into the past week. It’s a great book, lent to me by a friend, about what Japan in the late Edo period (18th/19th century) looked like: a self-sufficient and sustainable society. The book follows the narrator on his visits to friends and acquaintances and shares with the reader what he sees: by telling us the story, and showing us with great illustrations. The book is amazing in its richness of detail and the amount of research that must have gone in to it. Not only is the book a good way of learning what kind of elements a sustainable society can have, it is also a great way of learning more about what people lived like at that time (so I now think it should be compulsory reading for anyone studying Japanese, like I did).

But back to the quote. At the end of each chapter, the writer Azby Brown shares lessons learned: what elements of Edo Japan can – or should – we integrate in our modern societies? Many of them I’ve come across at different places: eating local, waste = food, and many others. But the above quote stood out to me immediately.

I’m a walker. Despite being very Dutch, I don’t enjoy cycling (in fact, I can’t remember the last time I took my – broken down – bike out of the garage). I’m happy just walking through cities, turning in to streets that seem interesting and exploring a city that way. But this quote highlighted some other aspects of city walking that I hadn’t really thought of much before. Interaction with others, and the link to a democratic society. And it makes sense, because by walking I feel part of the city and I feel connected – even if only slightly – with the people around me.

The quote also reminded me of a discussion I had with urban planner/architect Christian Dimmer in Tokyo, and his ideas on how cities can become a more sustainable urban space. It’s not just about having green buildings, energy-efficient infrastructure and renewable energy sources. It’s also – mostly? – about the people. If you cannot create a sense of community in a city than all of the rest becomes a lot more difficult to realize successfully. But governments and top-down planners seem to forget about this social dimension of cities too often, maybe because it’s also seems to me to be one of the most difficult things to get right.

One initiative in Japan that is trying to bring attention to this dimension of urban development is the Tohoku Planning Forum, which brings together professionals in urban development to find ways of involving local communities in developing reconstruction plans in the tsunami-hit area of Tohoku in Japan. This article also explains some more of the initiative’s objectives and ambitions for the future.

However, talking to different people including Dr. Dimmer in Tokyo, my impression that urban development in Tokyo is very much top-down driven was definitely confirmed. In a way, that’s understandable. But, like the above quote also shows: you can’t create livable cities without involving the people and communities that are supposed to live there.

There does seem to be quite a bit happening in the field of (sustainable) urban development in Japan – even if China takes the spotlight currently – but my impression is also increasingly that this market is much more difficult to penetrate as a European urban planning or architecture firm. Not impossible, several European (including Dutch) architecture firms are active on the Japanese market. But the Chinese market seems to be much more receptive to outside expertise and knowledge.

Along the tsunami coast

Under The Dome: frisse wind in de discussie over China’s smog?